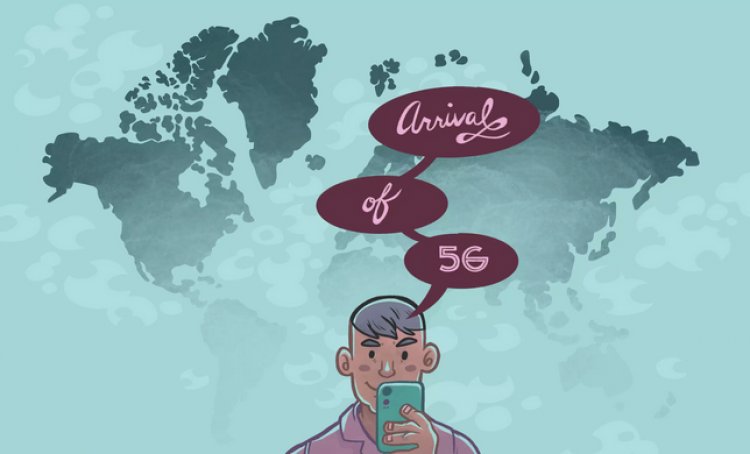 5G is the newest wireless networking technology that phones, smartwatches, cars, and who knows what else, will use in the coming years, but it's not yet available in every region around the world.

North Americans have been seeing 5G networks pop up in sporadic places for a few years now, limited in scope mostly due to the elemental challenges of 5G networks. Estimates say that by 2023, up to 32 percent of North American mobile connections will be on a 5G network.

5G fixed wireless broadband internet from Verizon and others is currently available, and Verizon, AT&T, and T-Mobile, among several smaller companies, have mobile 5G options.

Rogers Communications began rolling out theirs in early 2020 after investing over $4 billion USD on 5G in 2019. The new network currently covers 173 towns and cities. Learn more about the plans Rogers has for 5G to see when they expect a live network around the country.

Telus Mobility began rolling out their network in June 2020, in Vancouver, Montreal, the Greater Toronto Area, and other locations.

In December 2020, Videotron started offering its new network, beginning with customers in Montreal.

In late 2017, the Mexican telecommunications company América Móvil announced the release of 4.5 networks in anticipation of a 5G release.

Altice is clearly working on a 5G network but there's no mention on how to buy it or where you can get it. The only hint we have is on their website: "At Altice we are adapting ourselves to offer you all the benefits of 5G technology in the future."

The president of Claro has said that their network is "fully ready for 5G, once the frequency bidding process is carried out, we will be able to offer true solutions that our customers can enjoy." They currently offer GigaRed Claro which they say is a prelude to 5G.

In 2017, BTC announced that they were working with its providers on eventually launching 5G, and Attorney General Carl Bethel said in March 2021 that "5G is coming.”

However, no clear plan has been revealed publicly.

Ericsson announced in December 2018, that Tigo had chosen the company to modernize its radio access network. The deal "includes the provision of a 5G-ready multi-standard network."

There's no word on when 5G will reach Honduras but this agreement is an important first step. Their first 4.5G site arrived in mid-2020, which is another stepping stone closer to a full rollout.

Grupo ICE showed public support for 5G in April 2021, but it's unclear when a network will be available.

South American countries with the greatest populations began to see 5G come out in spurts beginning in late 2019.

Entel is the largest telecom company in the country and has partnered with Ericsson to bring 5G wireless service to customers.

Chile has the necessary infrastructure in high-capacity capacity centers to support a 5G launch. This technology should arrive in Chile no later than 2020 or 2021.

Movistar and Ericsson tested 5G systems in 2017 and will likely roll it out to customers around the same time that Chile sees 5G.

Tim is in the process of conducting 5G tests.

Claro is another company working on 5G. They first launched the network on July 14, 2020. It's currently available in São Paulo, Rio de Janeiro, and some other areas. Check that link for the most up-to-date listing.

Telefónica Colombia ran trials throughout 2020 and 2021, so they might launch the new network in mid-2021.

Tigo reached a deal with Ericsson to prepare their network for 5G. Ericsson said in December 2018, that they will...

...expand TIGO’s existing network and modernize the existing 2G/3G and 4G sites, making the network the best fit for TIGO to deliver 5G and IoT services in the future.

In mid-2021, Millicom, which operates under the Tigo brand, committed to a multi-million dollar investment to modernize its mobile network in Paraguay.

It's not yet clear when customers will see 5G, but these are definitely good starting points.

The same Millicom/Tigo that operates mobile network services in Paraguay, does so in Bolivia. Its modernization deal with Ericsson includes bringing the 5G-ready tech LTE to the country.

The company will modernize its network with the latest Ericsson Radio System products and solutions, paving the way for 5G rollout across the continent. As part of the project, Ericsson will also replace Tigo's core 4G package and implement Ericsson's dual core 5G.

SETAR is Aruba's leading communications provider, and through a partnership with Nokia, the two expect full coverage on the island by 2022.