What's new in Windows 11? What are its minimum hardware requirements? When will your PC be eligible for the upgrade? We've got answers to your Windows 11 questions. 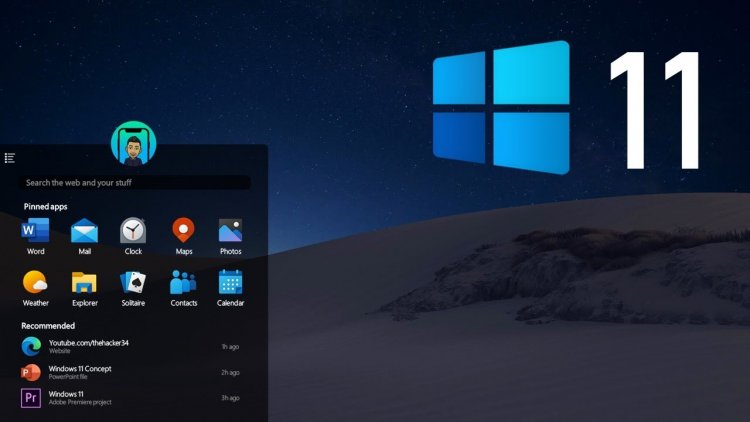 Microsoft took the wraps off of Windows 11 in a 45-minute online event, titled "What's next for Windows," held on June 24, 2021. A few days later, the company released the first preview of the new operating system for members of the Windows Insider Preview Program.

If you use a Windows PC at home or at work, how will this upgrade affect you? I've been collecting your questions and have assembled the answers here. At the risk of stating the blindingly obvious, Windows 11 is the successor to Windows 10. It's built on the same core architecture as Windows 10; indeed, Microsoft could have chosen to deliver the new features in Windows 11 through a series of semi-annual feature updates to Windows 10 without a name change.

Instead, they chose to make this a good old-fashioned "big bang" release, with a new major version number and a laundry list of new features.

For starters, there's a new user experience, with refreshed colors and icons, major changes to the Start menu and taskbar, an extensive reworking of the Settings app, a Widgets pane designed to deliver bite-size chunks of news and reminders, and a greatly improved way to snap windows into position.

Hardware-assisted security, which has been an optional part of Windows 10, is now mandatory, which means Secure Boot and device encryption are available by default to protect against increasingly sophisticated online attacks.

If you've been unimpressed with the paltry selection of apps in the Microsoft Store, you're not alone. Windows 11 offers a major update to the Store, including the option for third-party developers to make their conventional Win32 desktop apps available for secure downloads through the Store.

And speaking of apps, Windows 11 will include a new Windows Subsystem for Android, allowing Android apps to run on the familiar Windows desktop. There's one catch, though: For now, at least, those apps will come from the Amazon app store, which also suffers from Paltry App Selection Syndrome. In theory, the availability of Android apps could expand in the future with the addition of more robust app repositories like the Samsung App Store or even (gasp!) the Google Play Store. That feature is not yet turned on in preview releases, and anyone with a long memory of Microsoft's experiments in this space has a right to be skeptical.

What's the most recent Windows 11 version?

Windows 11 is currently available only to members of the Windows Insider Program. The most recent update,  version number 22000.71, was released on July 15, 2021. For a list of features and updates, see this official Microsoft announcement.

How often will Windows 11 get feature updates?

The most important change in the Windows 11 era isn't software at all. Instead, look at what Microsoft calls the servicing schedule, which will now produce feature updates once per year instead of adhering to the frenetic twice-a-year feature update schedule of Windows 10.

The support calendar (what Microsoft calls the Windows lifecycle) is pushed out as well, with Microsoft offering 24 months of support for Home, Pro, Pro for Workstations, and Pro Education editions, instead of the current 18 months. IT staff in business and education environments can look forward to 36 months of support for Enterprise and Education editions. That's an improvement over the unusual tick-tock support schedule implemented for Windows 10, where only H2 releases get three full years of updates.

Security updates will continue to arrive monthly, on the second Tuesday of each month.

What are the minimum system requirements for Windows 11? Unlike Windows 10, which was specifically designed to run on older hardware, Windows 11 requires relatively new hardware and will not install on older PCs. Most PCs designed and sold in 2019 or later will work with Windows 11, although there are some noteworthy exceptions.

Older hardware is less likely to pass Windows 11's stringent compatibility checks; Intel 7th Generation Core processors, for example, are not on the list of compatible CPUs, nor are PCs built using AMD Zen 1 processors. PCs purchased in 2016 or earlier are almost certain to be unsupported.

Windows 11 also requires a hardware security component called a Trusted Platform Module (TPM), along with UEFI firmware (no legacy BIOS allowed) and Secure Boot. Virtually all PCs designed and built since 2015 include TPM 2.0 support, although you might have to go into the firmware settings to enable it.

The published system requirements for Windows 11 are as follows:

Naturally, you'll need an internet connection to keep Windows 11 up-to-date and to download and use some features. Windows 11 Home edition requires an internet connection and a Microsoft Account to complete the out-of-box device setup; the option for a local account is now available only on business editions, where it's a necessary first step on the road to joining a PC to a Windows domain.

And this might be a good place to raise a farewell toast to 32-bit Windows, which is now officially retired. Windows 11 is available only as a 64-bit OS for 64-bit CPUs (32-bit Windows apps will continue to be supported, however).

When a preliminary build of Windows 11 leaked ahead of Microsoft's June announcement, the leak kicked off a flurry of superficial coverage that obsessed over tiny visual changes. To a casual observer, Windows 11 looked like a glorified theme pack for Windows 10.

That's not the case. There are some noticeable visual tweaks to what Microsoft calls the Windows 11 user experience (UX), including new icons, with more vibrant colors and rounded corners, as well as a new system font.

The taskbar contains one new button, which opens a Widgets pane on the left side of the display. For now, at least, the selection of widgets is limited mostly to Microsoft services. Other taskbar tweaks (except for the new centered alignment) are relatively minor, although the ability to fine-tune the visibility of tray icons and a crisper, cleaner Quick Settings app are welcome.

Visuals aside, Windows 11 also makes some fairly radical changes to fundamental parts of the Windows UX, including the Start menu and taskbar. The Start button still sits at the left of the taskbar, but the taskbar itself is now centered at the bottom edge of the display. (There's a setting to move everything back to the left if you don't feel like overpowering your muscle memory from decades of having Start in the lower left of the screen.)

Clicking Start slides open a new pane that barely resembles the scrolling lists of apps and utilities found on the traditional Start menu. In Windows 11, this space is split into two rectangles under a search box, with the top half dedicated to program icons and the bottom half given over to shortcuts to recent documents. You can pin programs to that top space and drag them into your preferred order, but that's pretty much the extent of customization options for programs, which can't be grouped into subfolders.

The only other tweak for Start is the option to pin some system folders to the bottom row, between the user profile picture and the power button.

File Explorer gets the same visual refresh as the rest of Windows, with a simplified ribbon and shortcut menus; otherwise, it retains the familiar three-pane arrangement. The Settings app, on the other hand, gets a complete makeover. A new navigation pane on the left provides ready access to the main categories, with sections on the right that slide open as needed to enable adjustments to system settings and personalization options.

On touch-enabled devices and tablets like the Surface Pro, you'll find big changes in the way that the pen and touch elements work, with more graceful transitions from PC to tablet mode and vice versa. On conventional PCs with multiple monitors and docking stations, the system is finally smart enough to remember the arrangement of windows when you reconnect.

Options for arranging windows on large external displays are significantly expanded compared to Windows 10. The familiar "snap" shortcuts still work to position windows side by side, but hovering the mouse pointer over the icon in the upper right corner of any window displays additional options for arranging three or four windows, as shown here. Those arrangements are available from the taskbar as well, allowing you to restore a specific arrangement with a single click.

Despite the significant UX refresh, you'll still encounter places where bits of older, even ancient Windows elements peek out. That's especially true for the last remaining bits of the legacy Control Panel as well as any app that is hosted by the Microsoft Management Console (MMC).

When will Windows 11 be released to the public?

Microsoft says the official release of Windows 11 (what the company calls General Availability, or GA) will arrive on new hardware in late 2021. Most knowledgeable observers expect the Windows 11 GA release to arrive in October 2021, and you would be foolish to bet against them.

The process of updating Windows 10 PCs that meet Microsoft's hardware requirements will start around the same time and will extend into 2022.

What do I have to do to test Windows 11 today?

What happens if my system doesn't meet the minimum system requirements?

In advance of the official release of Windows 11, Insider preview releases can be installed on devices that don't meet the minimum hardware requirements. When the preview period ends, however, those PCs will no longer receive updates unless their owners wipe them clean and reinstall Windows 10. It's possible that a handful of older processors, especially Intel 7th Generation CPUs like those in the pricey Microsoft Surface Studio 2, will be added to the processor compatibility list. But the more likely outcome is that older PCs will be blocked from the upgrade.

Hobbyists and hackers will, of course, find ways to fool the Windows 11 compatibility checker into allowing installations on unsupported hardware. But choosing that option will not be in compliance with Microsoft's license agreement and will probably cause serious compatibility issues; this type of hacking is not recommended for anyone interested in productivity.

How much will Windows 11 cost?

On any PC with a properly licensed copy of Windows 10, the upgrade to Windows 11 will be free.

Microsoft hasn't announced prices for Windows 11 retail editions yet, but it's reasonable to expect they will be identical to the prices of corresponding Windows 10 editions.

Will Windows 11 run in a virtual machine?

Yes, you can install Windows 11 in a VM. In fact, you can create a virtual TPM in a Windows 11 virtual machine that will satisfy the hardware requirements of the new operating system. On a Type 1 (bare metal) hypervisor like Microsoft's own Hyper-V, you'll be constrained by the same CPU requirements that govern installations on a physical PC. On a Type 2 hypervisor such as Oracle Virtual Box or VMware workstation, you might be able to spoof that requirement, but the effort is probably not worth the risk.

Will my existing apps and hardware devices work with Windows 11?

Most apps and devices that work with Windows 10 should work as expected under Windows 11. The new operating system is sufficiently similar to its predecessor that the differences shouldn't pose a problem for most apps. Of course, answering that question is why we have preview releases, so the best way to check compatibility for a device or app is to install the latest Windows Insider preview release and try running it. (If you encounter an error, be sure to use the Feedback Hub app to file a report.)