BlackMatter ransomware group claims to be Darkside and REvil succesor

BlackMatter ransomware gang, a new threat actor appears in the threat landscape and claims to combine TTPs of Darkside and REvil. 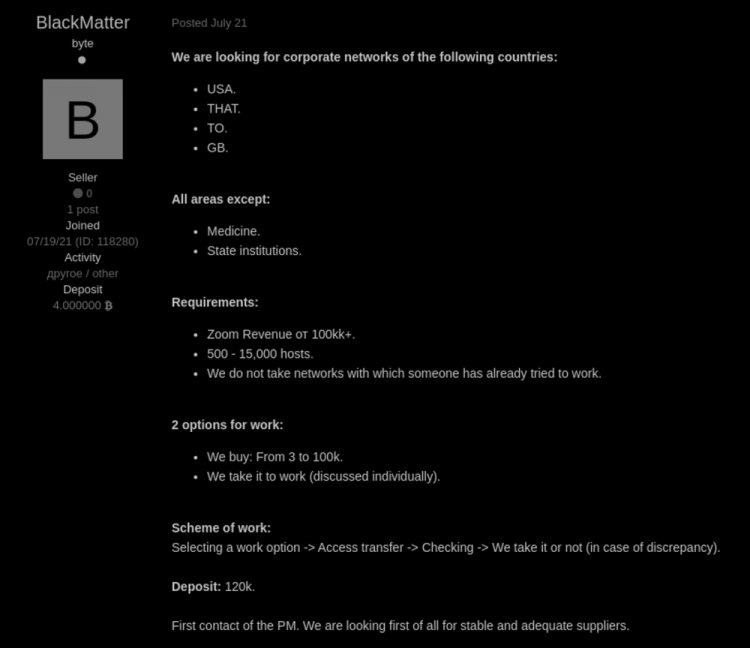 BlackMatter is a new ransomware gang that started its activity this week, the cybercriminals group claims to be the successor of Darkside and REvil groups.

Lile other ransomware operations, BlackMatter also set up its leak site where it will publish data exfiltrated from the victims before encrypting their system.

The birth of the BlackMatter ransomware was first spotted by researchers at Recorded Future who also reported that the gang is setting up a network of affiliates using ads posted on two cybercrime forums, such as Exploit and XSS.

The group is recruiting crooks with access to the networks of large enterprises, which have revenues of $100 million/year or larger, in an attempt to infect them with its ransomware.

The group is looking for corporate networks in the US, the UK, Canada, or Australia.

BlackMatter ransomware operators announced that they will not target healthcare organizations, critical infrastructure, organizations in the defense industry, and non-profit companies.

“The group boasted about having the ability to encrypt different operating system versions and architectures. This includes the likes of Windows systems (via SafeMode), Linux (Ubuntu, Debian, CentOS), VMWare ESXi 5+ virtual endpoints, and network-attached storage (NAS) devices (such as Synology, OpenMediaVault, FreeNAS, and TrueNAS).” reported The Record.